Understanding Marriage as a Covenant

What comes to your mind when you hear the word ‘marriage’? Putting aside the cultural and traditional associations such as festivals, wedding venues, and honeymoons, the Quran goes deeper to associate marriage with a vivid, memorable image that, if honored, will undoubtedly lead to a healthy, lasting relationship. 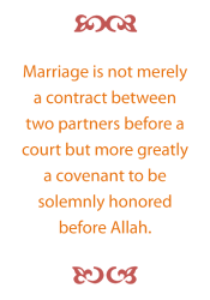 The Quranic image of marriage is that of a mithaqghaliz; that is, a tightly woven covenant. Marriage is not merely a contract between two partners before a court but more greatly a covenant to be solemnly honored before Allah. When the Prophet ﷺ spoke against physical abuse against wives, he did not say: “do not beat your wife;” but instead he taught: “do not beat the female servants of Allah.” This word choice is intentional as it reminds us that if a husband engages in any abusive practice against his wife, he is not merely offending his wife but more significantly violating the rights of someone who belongs to Allah. Furthermore, marriage’s physical union is supposed to result in a spiritual and moral responsibility that would eliminate any abuse or exploitation. In the context of forbidding financial abuse against wives, the Quran states: “And how could you take it back after you were intimate with each other, and they have taken from you a tightly-woven covenant?” (Quran 4:21).

Interestingly, the image of a tightly woven covenant is that it is the same phrase the Quran uses to describe the agreement between Allah and the prophets to deliver the Divine message to people. “And ˹remember˺ when We took a covenant from the prophets, as well as from you ˹O Prophet˺, and from Noah, Abraham, Moses, and Jesus, son of Mary. We did take a tightly woven covenant from ˹all of˺ them” (Quran 33:7). Therefore the same word used to refer to the sacred duty of delivering God’s message refers to the spousal agreement to honor their marital relation before Allah. Thus, this Quranic usage indicates that entering into a married relationship is a solemn journey that must remain pure and sanctified.

Given the Quranic view of marriage as a covenant, how would this Quranic image of marriage help us maintain and foster marital relations? There is no doubt that our thoughts and perceptions create feelings that drive our behavior. Thereby it is instructive to examine some of the perceptual implications of the phrase “tightly-woven covenant” and how they can make positive marital behavior.

First, this covenant is ghaliz (tightly-woven). This phrase communicates to us the idea that marriages are meant initially to constitute life-long relations that are too strong to untie. Therefore, ending the marital relationship for trivial or deceptive reasons is a clear violation of Allah’s spousal solemn covenant. One could deceive a judicial system or a whole community, yet, one cannot deceive Allah, Who is the All-hearing, the All-seeing. The Quran reads: “If they are determined to a divorce, [remember that] Allah is All-Hearing, All-Knowing” (Quran 2:227). These two divine attributes serve as a warning against deceit and lies.

Second, the word covenant is meant to be a binding agreement that indicates that each partner will be held accountable before Allah for any unfair or careless decision related to this solemn relation. 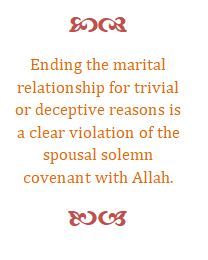 Speaking about delivering and responding to the Divine message, the Quran asserts: “Indeed, We shall call to account those to whom the messengers were sent, and We shall call to account the messengers [themselves]” (Quran 7:6). Here we are informed that the prophets shall be questioned about their deliverance of God’s message due to the covenant God took from them. Similarly, spouses will be specially asked about the marital violations as marriage was a covenant they took before Allah.

Third, the word covenant (mithaq) interestingly shares the same root with the word trust (thiqah). This semantic connection between covenant and trust indicates that the marital relation’s spiritual honoring will hopefully nurture more trust between spouses. This trust is the most crucial element for a healthy lifetime commitment. A simple reason for this connection is that the closer you are to Allah, the closer you are to each other. Getting closer to Allah will develop a healthy conscience that nurtures conjugal chastity and directs spouses to cultivate their relationship as a way of worship and honoring the Divine commands.

Fourth, the concept of a covenant demands commitment. Every covenant has several terms that must be solemnly observed. So what is the marital covenant about from the Quranic perspective? The shortest Quranic advice for a blessed marriage is BE NICE! The Quran advises husbands: “Live with them in accordance to what is mar’ruf (what is known to be good, fair and kind), and if you happen to dislike them, you may dislike something yet Allah turns it into a great blessing” (Quran 4:19). Instead of dissecting why you are frustrated about the relation, try to be kind for a few weeks, and you will turn your marriage around. Instead of portraying a negative image of your spouse before your children, try to change your attitude toward your spouse and start recognizing the many good things he or she does. I remember reading a marriage book of more than 300 pages in less than a minute! That was not a miracle since each page had only two words on the top right corner,” be nice,” and the rest of the page was blank!

The Quranic commentators agree that this respectable and kind relationship reflected in the (Quran 4:19) is what the covenant is mainly about. In his commentary on this ayah (Quran 4:19), Imam Ibn Kathir explains that the elements of marital kindness are demonstrated through the following: “Saying good comforting words, displaying good considerate behavior and looking good as much as you could. As you wish her to look good for you, do the same for her since Allah says, ‘Wives have [rights] similar to their [obligations], according to what is recognized to be fair” (Quran 2:228). The Prophet ﷺ says: ‘The best among you are those who are best to their families, and I am the best among you to my family.” This is a reminder that a thriving marriage requires nurturing so that it grows over the years. For this reason, we need to see marriage as a garden that needs nurturing to grow and flourish, and this is what we will discuss in the next part, inshaAllah.