Everyday we write something, whether a list of some kind, a small note, or a book. The process of writing is a wondrous ability that we humans enjoy. But let’s look at what the instrument of writing is called in the Quran and look at its meaning. 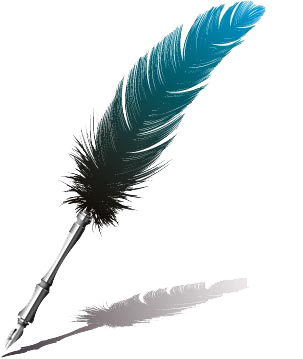 “Qalam” is the Arabic word for “pen,” the instrument through which we write. There are thousands of different styles and colors and shapes of pens, and they range in cost from a dime to several thousand dollars. Some are made of wood, some plastic, and some of pure gold, among these you’ll find some studded with diamonds. Whatever form they may take, the pen remains an enduring symbol of communication, the means by which thoughts, ideas, and information are moved from one source to its recipients, a system that God created for us. It’s also the way by which He lets His creation know His will.

So important is the “pen,” God Himself makes an oath with it in defense of the Prophet’s soundness of mind and tremendous character: “Nun. By the Pen, and what they inscribe, you are not [O Muhammad], by the grace of your Lord, a madman. And yours shall be an unfailing reward. And you indeed are of tremendous character” (Quran, 68:1-4). According to commentators of the Quran, God’s choice of swearing “by the pen” here, is actually quite profound. The pen, in the visible and unseen realm, serves several important functions: The pen records, at the hands of angelic scribes, the deeds of people, whether the deeds are big or small. Nothing of what we do (physically or mentally) escapes the inscription of the pen (“Then the Book [of deeds] will be set out, and you will see the sinners frightened of what it holds. And they will say, ‘Woe to us! What kind of book is this! It omits nothing small nor great, but all is accounted for!’ They will find all that they had ever done displayed before them, and your Lord will wrong no one” (Quran, 18:49)).

The “pen” is also applied to all the decrees of God, which are infinite, beyond enumeration: “And if all the trees on earth were pens, and the sea [were ink] with seven more seas to supply it, the words of God could not be exhausted. Indeed, God is Mighty, Wise” (Quran, 31:27). The “words” of God alludes to God’s knowledge, power in determining the affairs of all things, known to us and unknown (whether in the earth, in our lives and bodies, or in the deepest caverns of the land or the distant planets and stars, or any of the unseen planes of existence known only to God).

“Say, ‘If the sea were ink for the words of my Lord, the sea would surely run out before the words of My Lord would ever run out, even if we brought another one like it for replenishment’” (Quran, 18:109). A Quran commentator said about this verse, “However astonishing and far-reaching the narratives granted in Scripture may be, they are less than a drop in the ocean, for His attributes, wisdom, and knowledge are without limit.” The very first revelation of the Quran mentions the pen as among the blessings of God: Read in the name of your Lord who created; He created man from a clinging clot. Read, for your Lord is the Most Generous, who taught by the pen, who taught man what he did not know (Quran, 96:1-5). The original meaning of “qalam” in Arabic is “pruning” or “cutting” something out from something bigger, as in trimming a tree or bush or cutting one’s nails.