In Solidarity with Black Lives

In Solidarity with Black Lives

06/06/2020 – Bridgeview, IL – The Mosque Foundation stands in solidarity with our Black brothers and sisters in America and across the globe. In response to the widespread violence and systemic racism experienced by the Black community at the hands of law enforcement, the Mosque Foundation hosted a rally on June 6, 2020. The rally was well attended by local community members, the majority of whom were youth and families; brought together in cooperation with the Muslim American Society (MAS) of Chicago and American Muslims for Palestine (AMP). Tarek Khalil, AMP Chicago board member, moderated the event and introduced our guest speakers.

President of the Mosque Foundation, Br. Oussama Jammal, welcomed and thanked the community for showing up to express their true feelings for a just cause. “Without [Black people] we could not have built America today,” said Br. Oussama, “It is their blood, their sweat, and tears that built this country, and they should be treated more than equally.” 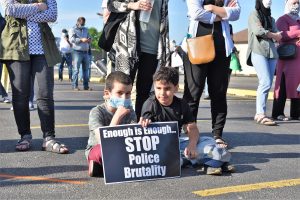 Longtime community member, Sr. Donna Demir, also addressed the attendees regarding being one of the few Black members of the Mosque Foundation community. “I am not from Ramallah or Beitunia,” Sr. Donna said, “I’m here because of my love and because of the grace of Allah ﷻ.” Sr. Donna challenged the community by exposing truths of the hardships of being a Black person in America. The starting point to heal: pay attention, listen, learn, and grow.

Next, Sr. Iman Williams spoke from her perspective as a Black and Palestinian youth living in America. She urged the community to create a welcoming atmosphere for all regardless of our differing ethnicities. “The youth of my generation need to be a part of the positive change to our community…We need action. Followup. Because if we do not actively combat racism, we will be here again next week, next month, talking about the next Black man, woman, or child.”

Sr. Deanna Othman is an active member of the community; she’s an educator, a mother, and an author. She tells the audience that we are at a turning point in rebelling against systemic racism. “Now is the time to realize that this land you came to as a refuge from colonialism or occupation or dictatorship has never been a place of refuge for another community.” Indeed, it’s time to wake up and confront difficult questions.

Imam Warith Deen Muhammad II also took the stage. He was pleased to see the crowd coming out to support Black lives and expressed his appreciation for all the supporters. Imam Warith spoke about historical slavery and abuse of Black people but reiterated his hope for a brighter future. “It’s my strong belief that we are not in a hopeless position right now,” he said. “The corruption is always temporary.”

MFCC Youth leader, Br. Jameel Karim, took the stage with many powerful statements, most notably imploring all to “Check yourselves…check each other… end of discussion.” Indeed, it is of utmost importance for everyone to work on purifying their hearts. “We are Muslims. We represent the greatest man that ever walked on this planet. The greatest gift we can give Black people is, Islam,” said Br. Jameel, “It is what gives us true justice. It’s a gift from Allah. A true believer can never be racist.”

Dr. Raed F. Abusuwwa, President of MAS, reminded the audience that Islam came to reeducate society. “It doesn’t matter your race, ethnicity, or gender. What matters is what you live for, what you stand for in history, and your actions.”

Finally, Sh. Jamal Said concluded the event by thanking the attendees and speakers. Sh. Jamal used his time on stage to remind the audience that “Silence is violence…with no justice, there is no peace.” He acknowledges that we have a lot to learn as a community to end this business as usual attitude. In the end, with a commanding gesture, Sh. Jamal asked everyone to raise their right hand and make a pledge never to use the derogatory term ‘abeed’ again.

We must take up the cause to let the world know that Black lives matter whether it’s in the Southside of Chicago or across the globe. We must respect life, and it must start now. The challenge is on us as Muslims to stand for justice for all.