Eid Mubarak! Wish you all a very happy and peaceful Eid 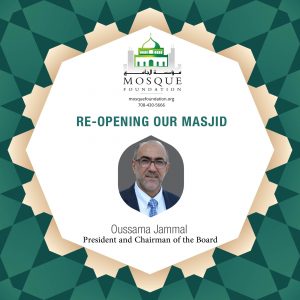 As you may have heard by now, the governor of Illinois has launched phase 3 of the Restore Illinois plan, which allows the re-opening of places of worship based on certain criteria and maximum numbers for gatherings. The Mosque Foundation is following the State guidelines and preparing its facilities for the implementation of the new guidelines while taking into consideration the safety and well-being of our congregants. 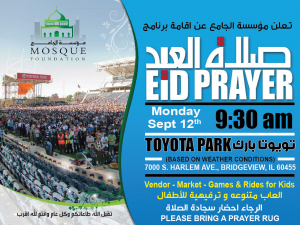 Qiyam Led by Our Youth Huffaz

In 2013, the Mosque Foundation and the Muslim American Society (MAS) created a unique Quranic Hifz (English) program where students not only memorize the Quran but learn the meaning behind the recitation. The goal is to produce quality Quran teachers who are secure in their faith and qualified to lead the next generation. This Ramadan […]

On Tuesday, May 21, 2019, the Mosque Foundation held its 18th annual Ramadan Iftar. Over 200 community members attended the event, including members of our interfaith alliances from the Christian, Catholic, Jewish, and Sikh faiths, local government officials, civic leaders, and representatives from various educational districts. It is our honor at the Mosque Foundation to […]

Rules for Ramadan Prayers at the Mosque Foundation

In order for Taraweeh and Qiyam to be exceptional this year, we have instated the following measures:   Boys and girls 4 to 12 years old are invited to attend MFCC programs, including babysitting for 4 to 5-year-olds. NO babysitting services at the Masjid during Taraweeh. Girls up to 16 years old MUST be accompanied […]

Every Sunday, at 12 noon, Spanish-speaking women discuss the basics of Islam beginning with the fundamentals of tawhid and progressing into more complex topics.

Every Sunday, from 11 am to 1 pm, native English-speaking women are invited to join this diverse discussion group of various issues of religious and cultural importance.

Spend Part of Your Ramadan Day with Quran Tafsir

This Ramadan, the Mosque Foundation will hold a special Tafsir class with Sh. Ali Mashhour. The class will take place in the men’s prayer hall every day for about forty minutes after ‘Asr prayer, and will have individualized time after the lecture for dhikr (remembrance of Allah), until Maghrib athan. The class is open to […]

IG-Night, which stands for, “Islamic Guidance,” is a program created for the emerging Muslim youth of our community to revive their faith and be proud of their identity. The motto is, “Knowledge is the light which dispels darkness.” At the kick-off event in Universal School this past weekend, the program began with Quran recitation and […]

In the wake of recent tragedies involving gun violence at places of worship, the Mosque Foundation invited the Arab American Police Association (AAPA) to present a special workshop to educate staff, key volunteers and security personnel, as well as the community about drill and safety procedures. The program titled, “Protecting Our Places of Worship,” was […]